The Jack Sauter Post 404 of the American Legion is a service organization with ties to the national organization of 2.7 million members, the Iowa State organization , and most importantly the local community of George. The wartime veterans dedicate themselves to God and Country and traditional American values; strong national security; adequate and compassionate care for veterans , their widows and orphans; and the wholesome development of our nations youth. They accomplish their goals by giving of themselves in church and civic organizations . They sponsor a young man to attend Boy's State each year, present classes on flag etiquette, display over 190 flags at an avenue of flags on national holidays, march in parades, conduct military rites at funerals of veterans. 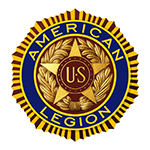 The establishment of an Auxiliary to the American Legion was provided for by the first national convention of The American Legion in 1919. The first national convention of the Auxiliary was held in Kansas City, MO in 1921. The American Legion Auxiliary has one great purpose, "to contribute to the accomplishment of the aims and purpose of The American Legion. Out programs are in the following areas, Rehabilitation of Disabled Veterans, Children and Youth Activities, Serving the Local Community, Disaster Relief Activities, and Peace and Security. The Auxiliary believes that the principles and ideals upon which the American Republic was founded, and for which American Blood had been shed, are still the cornerstones of our democracy, and as such should be safeguarded for the welfare of our future generations. Upon establishment of eligibility and paying dues to the local unit, she is a member of the Department and national organization and meets once a month at local unit.

The George Senior Women's Club was organized in October 1924, when a group of the town's public spirited women felt the need of a community organization to promote the betterment of life. This group immediately became a part of the state and national General Federation of Women's Clubs. The primary objective was " to gain knowledge to mutually benefit ourselves and the community." The secondary objective was to establish and maintain a public library. Other projects have included establishing and maintaining the City Park, organizing a Girl Scout Troop and providing leadership, sponsoring poetry contests and art exhibits as well as presenting the Arion awards to outstanding musicians in the local public school. The club meets the first Friday of every month, September to June.

The George Volunteer Fire Department had it's beginning in the year 1894. There are 20 volunteers on the George Fire Department. These days the Fire Fighters do more than just fight fires. They also train and are responsible for Hazardous Material spills, Storm Watching, Confined Space Rescue, and Vehicle Extrication. Several Members of the Fire Department are also trained First Responders and run with the GEMS. One of the favorite activities is going to the preschool for Fire Prevention Week in October. The firefighters enjoy giving rides on the fire trucks, answering questions, and teaching the kids about fire safety. In 1993 the Community of George built a new Emergency Center. The building houses both the Fire Department and the George EMS. The beautiful building was built with donated funds from the public. Before construction was started, $60,000 was pledged. This is one of the finest Emergency Centers in not only Lyon County but in all of Northwest Iowa, especially for a town the size of George.

The George Emergency Medical Service, known to the area residents as the GEMS was founded in the fall of 1977. From that time to the present, the Gems have not stopped growing because of their great support from a caring community. Because of that, George can be very proud of being one of the best-equipped rescue units in the area. The GEMS unit is completely volunteer, and they provide their services free of charge. To be qualified to become a GEMS member, individuals must be certified in CPR, and each person must be certified as either a First Responder or an Emergency Medical Technician. The GEMS want to remind you that they are trained and ready to assist you 24 hours a day.

The George Wheelchair Repair shop is a satellite location of Hope Have International Ministries.  The George location got its start in November of 1998 in the back shop area of the Main Street Plaza.  To date the volunteers have refurbished over 4000 wheelchairs!  When finished the chairs are shipped to Hope Haven's headquarters in Rock Valley, IA and distributed primarily through mission efforts to over 94 countries around the world.  The George shop operates Monday, Wednesday, and Friday mornings and volunteers are needed for a variety of tasks.

The mission of Girl Scouting is to inspire girls to the highest ideals of character, conduct, patriotism and service so that they may become happy and resourceful citizens.  Visit the Dakota Horizons Girl Scout Council on the web at http://www.gsdakotahorizons.org

The George Betterment Club is a nonprofit organization designed to benefit the community. There are no age limitations for joining the club.  Men & women are encouraged to join.  The club benefits the city by having fundraisers and putting the money back in to the community. They not only help out the youth, but they also help people in need. The George Betterment Club organizes the Run, Pass, and Punt and Super Shooters contests. They also support Little League, The Sandbox Project, and they raise money for the GEMS and Firemen.

The Ostfriesen Genealogical Society was organized in March, 1985. The group meets once a month in the George Public Library on the third Saturday of the month at 1:30 pm.  The meetings are informal.  There are usually 12-16 members present.  Our membership includes about 250 people, 15 of whom live in Germany.  Each month following the meeting a newsletter is sent to the members.  The newsletter tells the happenings of the meeting and tells the date of the next meeting.  Any additional information which might be of interest or special help is sent along.

Membership dues are $15 per year for each U.S. member.  Dues for German members are $20.

Use this site to search for genealogy records in Lyon County:  RootsWeb -- Lyon County

The George Kiwanis meet at the Pizza Ranch every Thursday at noon.

Kiwanis Motto: Kiwanis is a global organization of volunteers dedicated to changing the world one child, and one community at a time. The George Kiwanis Club focuses on service and support for the youth and elderly in and around the community of George. Major projects include: GLR weekend food program, sending kids to camp, Crayons for Haiti project, Support for George Freedom Days and other local community events and organizations that benefit kids.